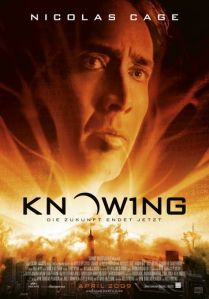 Recently we watched the movie Knowing with Nicolas Cage. This film is hard to discuss without giving away details, so if you’ve not seen the movie and intend to, and like to enter the experience without any preconceptions perhaps not reading any further would be a good idea.

I have had debates with both my resident daughters after seeing this film regarding the identity of the silent creatures we see on film. Are we to see them as angels or as aliens?

These creatures appear on the scene just prior to the world’s final conflagration, and though their intentions seem ambiguous throughout the story, by the end you learn that their goal is to rescue off the dying planet human pairs to populate other, younger, and more flourishing worlds.

So, are they angels or demons? Is this a Noah story or something else?

Years ago there was a wildly popular book called Chariots of the Gods by Erich von Daniken. von Daniken postulated that the world has been visited by aliens in the past, and that much of the religious imagery used by various religions, but especially in the Jewish and Christian heritage is a reflection of that alien presence. So what the biblical writers record as ‘angels’ might very well have been alien visitors.

In looking for something else a few weeks ago I noted that the 17th best selling book at Amazon.com currently is this book. It comes in at #305 overall. I wondered, “What’s up with this?”

I don’t know if the movie Knowing spawned a new interest in the book, or if the resurgent popularity of the book and its thesis formed the impetus for the movie. Though some viewers see Christian supernatural themes in this movie (the main character is a man estranged from his hard core preacher father – we preacher fathers can be quite hard to deal with – and his childhood faith), in my opinion, the filmmakers were channeling von Daniken and not Noah.

In other words, to the question ‘Were they angels or aliens?’ my answer is, ‘Yes’, which is as a thesis, ultimately, a denial of angels.

I’d love to hear others weigh in on this film.

(Note: the film is currently #1 in online download from the iTunes store)