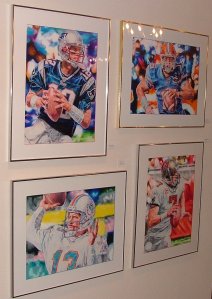 I suppose if a church were to sponsor a tractor pull, it would raise some eyebrows. If we were to host a UFC fight in our sanctuary, questions would be raised. So, I can understand that a church hosting an art show and music coffee house is an odd and unusual thing which begs for explanation.

This event was sponsored by Hope Presbyterian Church as a community oriented event celebrating God’s creative gifts. So, Friday and Saturday nights of last week, our auditorium was transformed into an art gallery / coffee house. Couches and tables set off the music side of the room, and displays of local artists adorned walls and tables on the other side.

Through the course of both nights, local musicians played sets of 45 minutes to an hour. We did not require that the artists or musicians be Christians. Our heart was to build bridges to communities which have developed suspicions of conservative Christianity. We simply wanted to provide a venue where artists could have their work seen and heard.

Art was for sale, and some sold. Music was provided free, and some tips were received. Generally both nights we had a consistent presence of at least 60 constantly rotating people in the room at one time. At the high point on Friday night, we estimate that a hundred people were in the room, most of whom would have been people who never before had set foot in our church (and perhaps any church). 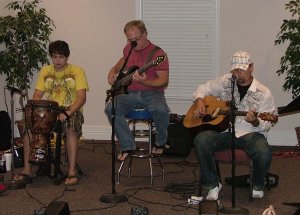 Certain risks attach themselves to any such effort, of course. That the final song in the wonderful set by the group Haitz was a lively acoustic version of “Rock ‘n’ Roll All Night” by Kiss was somewhat of a surprise. Truth be told, I enjoyed it.

This event does not appeal merely to art ‘snobs’. It does attract the artistically oriented, of course. One man who is now a member of Hope Church includes our hosting of this event as one of the reasons he was attracted to us in the first place last year. He is an artist whose presence has greatly blessed us. But it’s appeal is broader than the artistic community. We find that it appeals to people who are just looking to enjoy a fun evening. Hope’s associate pastor Geoff Henderson had several friends from his kayak fishing on-line forum attend and they commented on what a good time it was.

I believe that we did bless the community. And, in return, the community blessed us. At best such an event is pre-pre-evangelism. And as such we cannot always count our success in terms of ‘souls saved’. But we pray that God is using this labor to build bridges which will give the world a far more positive view of the church and, ultimately, of the Christ who is our Lord.