On Saturday night, the Saturday Night at the Movies crew in our house watched the 2004 movie Saved! in anticipation of discussing this on Sunday morning. I did not really want to watch it, but surprisingly (to me) I liked it.

I liked it for a couple reasons. First, I liked the way it exposed how silly some of our Christian behaviors can be or can appear to the outside world. I liked the foibles it exposed which prevent us from communicating clearly with the world. We can learn from such exposure.

And I think I liked the fact that those pilloried were far enough removed from my own particular slice of the Christian subculture that I could avoid feeling directly attacked and could feel superior to those who are closer to that segment. And seeing that in me hurts. I’m really no different than those mocked in the film. This sense of Christian superiority is the very thing which is exposed, and which I so easily fall into. 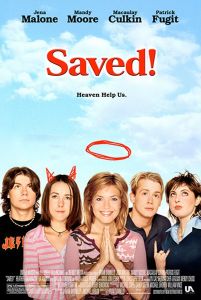 As a satire this movie worked, as satire is supposed to have exaggerated characters. But as I’ve reflected on it, I’m left with a couple of less than favorable impressions. The first is that satire of one’s subculture should come from those within the subculture itself. When satire comes from the outside, it can easily be seen as ridicule. I wonder if the producers of this film really intended it to be ridicule, and whether, therefore, we should be more offended than we are that someone would attack some of our own. (No matter how I want to distance myself from those exposed, they are Christians.)

My other concern is this: the film itself, in condemning the preachiness of conservative Christians, cannot avoid the same ‘crime’ of being ‘preachy’. The film ends with a ‘sermon’ about how God made us all different, and therefore we should all be accepted – gay/straight, able/disabled, Jew/Gentile. The only unacceptable difference are hypocritical preachy types. I wonder if the producers can see that they have skewered themselves with their own sword?

One thought on “Skewered!”